The elven city of Feng had witnessed the humiliation of the annoying and haughty Lanell of the House of Finwe.  Now that our heroes had the public on their side, Princess Airethiel asked if they would return with her to their seat of government, Heritage Hall, to secure the support of the elders of the Triumvirate.   The party would have to convince the head of the three noble houses that they should not accept the miracles offered by the Mage College and that Karafey should stay an engaged part of the Realms.

Andolin and Veriliegh agreed to present themselves and make the case.

Standing stripped of weapons, magic, and most of their clothes,  the witch and the archer explained the dark angel’s manipulations to the Lord Gadreith, Lady Finwe, and Lord Finvain.  It was a protracted and difficult debate, but they were victorious.The party reunited to celebrate with the Princess and Prince

Validorn in his Offices. However, our adventurers would get no respite as a messenger arrived with dark tidings.  Elven newborns were dying in the border cities of Karafey.   It didn’t take the party long to piece together that the Elven Tree of Life was under attack by Gah’Dreel’s minions and that they would soon be blamed.

Stricken, Airethiel left them to see what she could do to stop the madness and attempt some damage control for their newly forged alliance.  And, our heroes went to find the High Elven druid who tended the Tree.

The High Druid, Cedric Caldorn, lived at the very northern border of Feng.  He seemed friendly to the party but very addled.  Piece by piece, the party was able to patiently extract the general location of the mystical Tree.  They also learned that the reclusive Cedric had dealings with another visitor, a Registrar from the Mage College.

With a new sense of urgency, our heroes headed to find the threatened Tree of Life.  Hidden in plain sight, they found the sickened oak, but also walked into a deadly trap!  A humanoid mass of vegetation dropped from the dense canopy, along with his tendrils and puppets, to attack the party.   Selena and Mara, who had been attempting to tend to the Tree took the brunt of the attack.  Andolin and Azrael hacked and slashed their way 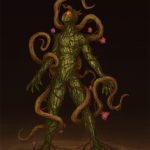 through vicious thorn and vine in order to free their companions, while Kremzeek discerned that his magical fire was the best way to deal with the Vine Lord and his mindless underlings.  However, the creature seemed to renew and revitalize himself after each blow dealt.   Veriliegh, who had plane shifted, came back with a vengeance and finally vanquished 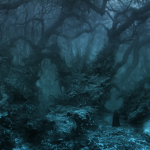 the monster once and for all with a magical blight.   A spell, which in the aftermath, Kremzeek ascertained was similar to what was being used on the Tree of Life.  Using a combination of powerful incantations, the party was able to wipe away the arcane affliction.

Despite another victory, there is still so much to be done…