Upon hearing strange noises coming from the eastern wing, the party decides that the door Malmiir barred must be opened.  Inside, they encounter Dragon Master Miscravige, clutching a large claw of a dragon, behind a meat shield of the Children of Arach.  Despite the party being conflicted about the innocence of the cultists, they charge.  Fire, arrows and spiritual weapons rain down on the enemy.

The ensuing fight comes to a halt when a dark figure appeared to rescue Miscravige from the chaos. 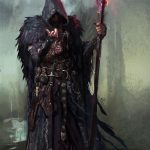 The imposing figure threatens the party and all who might aid them, producing proof of his intentions.  The party was horrified at the sight of the corpses of the bloodied and beaten drow Cazz, her elven husband and three young boys.  Azrael, seeing the figure for what he really is, takes his True Form to even the odds.   Unfortunately, the transformation catches Ao’s attention.  After a death, an escape, a rebirth, and the summoning of a demon 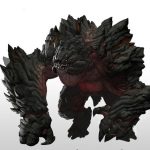 creature, our adventurers are left with a narrow victory and many  more questions.