After dispatching the dead and looting the Cultist’s encampment, the party discovered some strange amulets, some coin, and a leather folio with journal transcipts of a long dead elf’s work in Unis Mythris.  The transcripts had been prepared by Jaydeen Dodal, Registrar at the Mage College, that the party had killed in Tyr.  They also discovered several barrels of water that radiated magic.  Each of the barrels were branded with the symbol of the Black Marques, Spirious Durnhull’s nefarious organization. 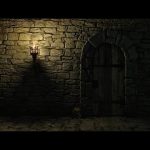 The party then explored the lower level of the library at the Eleven Academy of the Arts.  There, they found 4 doors.  One door the Cultists had clearly been excavating, 2 others that had heavy wood door panels and beautifully carved stone frames.  Wisely, Spencer passed by the ornate doors and picked the lock on what appeared to be a maintenance closet.  Here the party identified a set of wooden shelves, which at first glance looked like it held random supplies, but upon inspection yielded unusual construction.   After some clever deductions, the party figured out the Blo

od Magic mechanism that opened to a secret room of dwarven make. Here, they found Blood Letting tables, a well appointed hostage room, and the 5 cabinets designed to hold contents of each True Blooded Family Line.  The party rescued the full Nadar Phylactry and the empty Dreyrugh Phylactry.   The other 3 were gone.

Meanwhile, through the careful rituals of the Marakeenian Witch, Veriliegh, the party also learned of the unfortunate deaths of the half-drow children at the hands of a Registrar and how the Children of Arach, had not seen their Dark Angel, but they knew he would come as foretold, as the Herald of Arach. 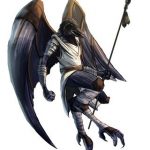 Lastly, in the early hours of the morning, the party spied on a flock of confused Kenku, that had come to pick up the  barrels to deliver to Tyr.  The flock left with the strange water, and now the party must wake to a new day and new decisions.