After securing a general location of the last of the five Blood Magic Phylacteries, the party heads to Marakeen.   They have learned much about these vessels, and those who seek them, from their short visits to Tyr, Unis Mythris, and Ferthe.  They now know that whoever controls the powerful Blood Magic holds the power to level mountains, destroy cities, and even modify the very structure of the living world.  The party hopes to stop the College of the Magi and their powerful allies, from obtaining the last  Phylactery somewhere in the deserts of DarJeel.

Our adventurers have lost and gained much recently.  Malmiir, the Bastard of King Ironbreaker, felt he must return to Tyr to assist his Kingdom and left the party.  Spencer, lost her freedom from the “family business,” as she bargained for aid from her father, the nefarious Spirious Durnhull.  Azrael lost his anonymity and almost his life, as he channeled his creator Ao’s celestial might.  Yet, they have gained new tools, information, and friends to balance this. The newest of among these being Kremzeek “The Old and Wise,”  a mage from the all-but-extinct goblin race.  Kremzeek was “gifted’ to the 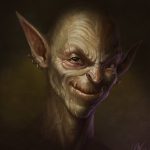 party by Spirious and is now is their guide to the final phylactery and perhaps even the enemy’s intentions.

The party crested the southern tail of The Pillars and flew across the Grassy Plains of Marakeen on winged horses, another gift from Spirious.  They met the Al-Tah Keer, nomadic barbarians who hunt the steppe with terrifying Salki, winged cobras, instead of falcons or hawks.  Although brief, the encounter left them with new tribal tattoos and possible promises of future assistance and, perhaps, other pleasures.

Once in the city of DarJeel, the party went shopping.  As the ancient saying goes, “All good things seem to end up in a Markets of Markeen.”  Here they purchased from shopkeeper Bahejah bint Abbas a map to the sunken temple of Ao’s twin keepers of life and death Daeo-Das.  Unfortunately, they discovered the Children of Arach had a two day lead to the temple.  The party 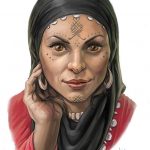 was able to barter for a piece of information the Cultist didn’t have, the secret entrance goblin thieves had created long ago.  Our heroes also purchased camels, rations and other sundries as the spirit of Marakeen Mercantilism took hold.

Now, they must regroup and plan their journey across the desert terrain that surrounds DarJeel and the assault on the Sunken Temple. 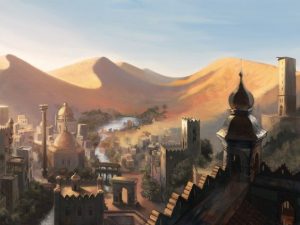