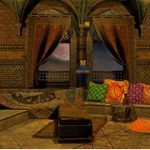 from the Empress arrived.  Feeling they were on the brink of capture, the party decided it was past time to make their escape.  The group decided that there was a pattern to the Magic College’s actions and that each of the powers of the realms had been promised some great Blood Magic boon.  To confirm this, they decided that the last realm should be visited and they were Skaldia bound.

The latch was given to Tarrin and the powerful arcane item from Unis Mythris opened a portal to his heart’s home, the Skaldic coast and the town of Ruske. 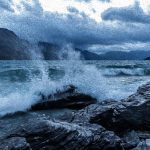 They would not make their escape unnoticed however.  The Empress had an unusual and powerful spy, a genie!

Andolin and Azrael attempted to hold off the D’Jinn and his air elemental, but the powerful entities followed them through the portal and they were forced to confront the creatures on the Skaldic Coastline.  The party changed tactics and attempted to deal with the elemental trickster. 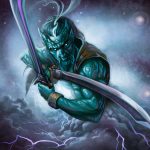 They gained a five-day reprieve and the D’Jinn disappeared to enjoy what the North Eastern Realm had to offer.

Our adventurers then headed to the Skaldic village to the mead-hall of the Lor Family.  Inside they met Tarrin’s eldest brother, Balder, and his retainers.  The Longhouse was a welcome respite from the chilling northern weather and surf.

Balder welcomed them and provided the travelers with clothing and lodgings.   The enjoyed a breakfast and some startling entertainment from a bard. 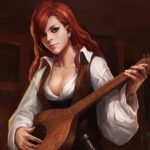 The Bard explained that a new ballad had been making its way up the coast from Ferthe, The Ballad of Gah-Dreel.  The original songwriter was a Lady who was the sole survivor of a terrible fire that burned down her entire estate and killed all the inhabitants including many children.  The Lady was the Mistress of Brightwater, who was Mara’s mentor into the secret faith of D’Dwynn.  Lady Brightwater is now described as crazed and will not stop singing the haunting song to anyone who will give ear.  Mara was devasted and the party worked to decipher the strange lyrics for its hidden message

As the party drew upon all their knowledge and lore, the fallen Dark Angel’s Gah-Dreel’s taunting message became clear.  The fiend now had Balder’s 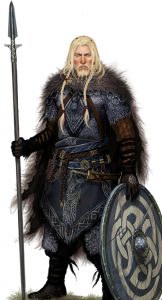 Lady-Wife Silga in his clutches and he was attempting to somehow restart the Blood Magic heritage within her womb. Selena, the only True living Blood Mage, was clear that The Dark Angel was attempting to change the intended order of Ao’s magical gift to Humans, in effect becoming their new “Father.”

Balder, frantic and furious, has promised his army to the party, and now they are left with difficult plans to make.