At the House of the Fig Leaf, the party decides to see if they can resolve Verileigh’s “family issues” before their journey to the Sunken Temple.  They pump the proprietor of the Fig Leaf for information on Verileigh’s older sister Sima.  They discover Sima has been tending her husband who is gravely ill.  The party decides the sickness with which he and many in the city are stricken is suspiciously similar to what they saw in the warehouse district of Ferthe.  After a moving reunion between the two sisters, the party sets to work on investigating the source of the strange malady and curing it. 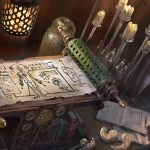 It seems that ancient goods coming out of Unis Mythris are steeped in the residue of  Blood Magic gone awry.   The party gathers up the artifacts to destroy and sends a message to warn Spencer’s father about his sullied merchandise.

Meanwhile, Sima’s husband Chem has been revived thanks to a potent combination of Divine, Witch and Blood Magic.  To help her sister understand her Art, Verileigh performs her rituals and calls on the spirit of their dead mother.  Finally, Sima understands that her sister is not cursed but truly gifted.  She is grateful and apologetic and understands that she must clear the family shop of the corrupted artifacts. 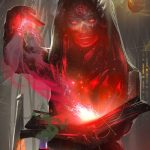 The Cultists, with their three day lead to the Sunken Temple, begin to weigh on the party’s minds.  So, they disembark from the Gate of Sin in the northern section of DarJeel.   As they gather and final supplies water for the desert trek, they meet up with Andolin’s father.

Kasiir al-Alsan has a proposition for the group  If they can get his caravan to the Trader’s Oasis, then they can keep a part of the caravan for the rest of their journey.  The party agrees and sets off into the harsh desert world of Marakeen.  All goes well until their journey is halted by a creature that erupts from the very sands beneath their feet.

The massive creature smashes through the caravan and throws the party into a fight for their lives.   The bulette is a huge creature that can swim through the sand and leap up to 30 feet to ram or bite its prey.  The creature is not alone and has two hungry offspring in tow. 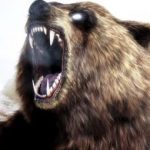 An enraged and engorged male bulette also attacks, adding to the chaos.  The party has to call on all their unique physical and magical resources to survive.