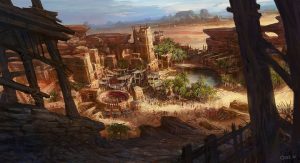 The party reached the Trader’s Oasis, down one camel and one cart, but mostly intact.  There, they met Marius Sans and offloaded Kasiir al-Aslan’s Cargo.  The oasis boasted many unique sites including a dragon bone entryway, mobile brothel, and even arms from Unis Mythris, courtesy of the Children of Arach.  Our adventurers also gained several pertinent scraps of information from their time at this desert waypoint.

Most importantly, they found out that the Cultist had set up huge a dig site, where they believed the Sunken Temple to be.   Eager to beat the Dragon Cult to the phylactery, the party resupplied and set off on the last leg of the journey.

Kremzeek, their goblin guide, was true to his word and was able to locate secret tunnels that would lead into the temple.  Our heroes squeezed and shimmied their way through the desert caves carefully until a sprung trap turned their pathway into a tunnel of death.  Chased by an ever-growing fireball, the party used all their skills and physical prowess to make it to the end of the goblin gauntlet alive and together. 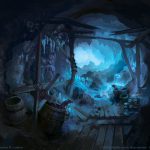 However, this did not mean an end to the challenges they would face.

A fifty-foot tall visage of Ao on a cliff face, sunk deep in the earth, marked the entryway to Sunken Temple. Though the antechambers had long been looted and cleared out by the goblins, more significant treasure lay ahead.  The party had to solve the Trials of Ao’s Children.  Ao’s eldest son, Asdin the Enforcer, had a circular chamber of dark beauty.  The murals on the wall held fates of punishment and reward, while an altar held a pair of shackles.  Penitence was required.  Tarrin bravely tested his fate in the shackles and won the party entry into D’Dwyn’s room.  Here they solved the Hidden Sister’s equity puzzle in short order and revealed the doorway to third and final offspring of Ao, the conjoined twin gods, Daeo-Das.

Despite the chamber being wrapped in an unearthly darkness, Tarren again showed his fearlessness by striding into the room, where his head discovered a brazier on the other side!  Once the brazier was lit, the room began to rotate revealing a spectacular orrery above and quickly disappearing floor below.  The party had now gained entry to a hidden chamber.  Here, they discovered the Sunken temple was not a temple at all but a tomb.

Descending five stories to the bottom, the group came upon The Pool of Lamentation guarded by strange guard dog statuary.  Mara used her powers to glean that the phylactery was hidden deep within the pool, while Azrael used his hands to discover the pool is filled with blood.  After much trial and error, the party realized that the pool lived up to its name.  Though revealing illuminating visions, once immersed in it, such sorrows are revealed to the intruder that it causes them to succumb entirely to their own despair.

Our adventurers must now figure out how to retrieve the phylactery without losing their minds in the process.