The Prava Phylactery was finally extracted by Mara’s undead minion which, as expected, immediately brought the temple guardians to life, all of them.  The blood golem that emerged from the Pool of Lamentations was a mighty foe that left a trail of contagion and madness in its wake. However, in the end, our heroes were victorious and emerged from the miles of Goblin tunnels with the Phylactery and themselves intact. 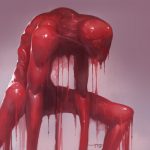 A few miles away, a great rumbling shook the ground as the Children of Arach raised the other end of the Sunken Temple.  It was wondrous to see Ao’s stone visage wrested from the desert depths, and Kremzeek knew immediately this formidable task could only be accomplished with Blood Magic. 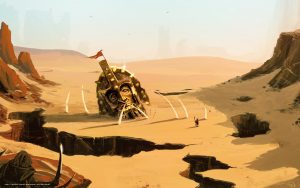 Unfortunately for the cultist, they had no idea they just spent their precious ichor fruitlessly.  Feeling satisfied that the balance had shifted now in their favor, the party left the scene and traveled at a more leisurely pace through the scrabble and sands back to DarJeel.

Our adventurers entered through Sinners Gate where they where met by a messenger and honor guard of the Empress bearing an invitation.

Our group felt little choice but to accept the escort.  Once inside the walls that surrounded the Kudu, they witnessed the Empress descend on Gryphon-back and address her troops to prepare for war.  Disregarding normal courtly decorum, the Empress then approached the group and gave them an informal welcome and invitation to rest and relax.  Selena couldn’t help notice the Empress’ tattoos had been applied in the style of her own, that of a Blood Mage, which she wore unabashedly.

Dinner began with introductions of her the councilors General Asadeen, High Priestess Safana, and Kaseem the Master of Coin.   However, before the meal began the Empress laid bare her expectation that the Prava Phylactery would be returned.  The dinner then turned into a heated negotiation that the party found neither restful nor relaxing.  After much discussion, our heroes headed back to their rooms to contemplate their next move.