The party settled into their longhouse in Ruske. Their unusual arrival did not go unnoticed, and an odd fox found its way to Veriliegh.  Intrigued, Veriliegh followed the creature

to the northern edge of the encampment where eight dark hooded figures beckoned.   The Völur, a long-standing coven of witches, assisted Verileigh in bonding with her new wolf spider familiar.  They also asked her to join them and be their missing ninth sister.   In the end, a deal was struck, but not the deal the witches had hoped for.  Andolin offered up his true sight for the coven’s use, and in return, they would do what they could to contain the d’jinn that had followed the party from Marakeen.

Balder, Tarrin’s eldest brother, returned to discuss the March on the Mage College.  The party learned of Balder’s intention to rescue his beloved and barren wife Silga.  Unfortunately, the land bordering their territory, Eske, had not granted the High Chieftain’s son leave to bring the army through.  This was unusual and a great affront.  Balder feared that perhaps the Mage College had 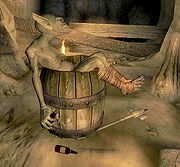 Our adventurers trekked to Eske and discovered they had unwanted guests.  Gorhim had sent spies but our heroes discovered them and dealt with them easily.  The party’s situation became more alarming as they approached Chief Bryn’s Hold and discovered a family of Storm Giants!  These rare magical beings had been ensorcelled by the Mage College and been given to Gorhim as thralls.  The Giants were ill-kept and the party immediately planned to try and save, rather than battle, these guardians of the fort. 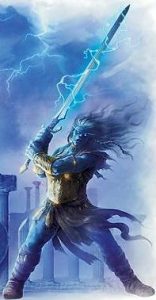 various abilities.  Selena and Veriliegh used a combination of powers to free the Giant Father and Son from the magical enslavement.  The Skaldic brothers charged in to find the traitorous Chieftan, while Spencer and Azrael used their stealthy skills to locate and reveal the location of the Registrar monitoring the battle.  Andolin stung with his deadly arrows from his saddle, living up to his Marakeenian roots and nickname “the Wasp.”  Kremzeek and Mara got in close to attempt to help the raging Giantess, who battled her own family with tears streaming down her face.

The party won the day, but with a cost.  Andolin’s arrow pinned the registrar’s skull to the parapet, ending the spell’s control.  The Giants were now free, but only after Tarrin’s brother had been killed by a deadly lightning bolt.  Tarrin, enraged, tore the armor from his body, grabbed the disloyal Chieftan, and killed him with his bare hands.   The Skaldic forces arrived, and Kremzeek was able to claim the Giantess’ ear.

Now, Tarrin faces a complicated stew of personal and political pulls and pushes that could effect the entire group.  Will our adventurers turn back or forge ahead to confront the dark forces that have gathered to remake the world?