Angels abound! Time stopped in the prayer tent of the cultists who now simply call themselves  “The Children.”  Azrael’s choice to appear in his true celestial form prompted a visit from his brother Miz’iel. 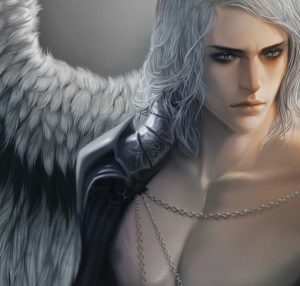 His tidings were not as dire as our heroes feared, but rather he brought a message of approval from Ao and gifts.  The gifts came in the form of powerful magical boons for the party.  However, when dealing with the God of Balance, power does not come without great responsibility.  Our adventurers each accepted their tasks and the Guardians of the Scales were born.

Not only did the event yield new powers, but it also brought Azrael new friends.  These eight humans are a  hodge-podge group of ages, backgrounds and abilities that quickly bonded into a party of devoted disciples.  Azrael must now assist them in finding their purpose while keeping them from harm, which may prove difficult.

Upon returning to the Chimera, a response came from the Royal Court of Tyr regarding the noseless prince our adventurers held as  prisoner.   An exchange would be made in the elven city of Feng.

The party made their way silently on foot to the drop spot, a bridge over a river that is the city’s eastern border.  A small party of elves made the drop.  Some clever casting and skill use allowed the party to penetrate their adversaries’ plans, and our heroes saved the real Malmiir, killed the dwarven prince, and routed the elves.

The party discovered they had an observer though.  Andolin noticed a 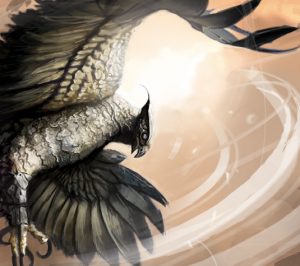 hawk paying close attention to their discussion after the skirmish.  The hawk engaged Andolin and drew them into the shelter of the woods.  Before Tarrin could unleash his ancestral barbarian horde upon the city, the hawk transformed into an elven girl and asked himto hold his attack.

Our heroes would learn the girl was Princess Airethel, first of the House Gaidreith.  She entreated our adventurers to come to her aid.  The Princess revealed that she was betrothed to Tarrin’s brother Visgoff.  However, the two could not wed because of a newly risen political force from the House of Finwe- LaNell! 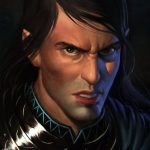 LaNell was an old adversary that the party had humiliated and sent packing back in Unis Mythris.  He had returned to Feng to sew dissension amongst the Triumvirate of Houses that ruled the elves of Karafey.  He had pushed for a separatist and isolationist agenda.  His platform relied on the Mage College’s magic to keep the elves clean and racially pure.  Thus, he was creating hostility for The Princess’ plans to wed her human Skaldic lover Visgof and giving Gah’Dreel another ally. In addition to this, LaNell had painted our adventurers as villains who wreaked havoc in the Realms and must be stopped at all costs.  He was also brokering alliances between the wretched dwarven queen, Lady Ironbreaker and the elves as part of his growing plot.

The Princess promised the party that if they could skillfully eliminate LaNell, without implicating her or furthering the public’s negative perception of the party, she would bring the elves to their aid in the coming battle against the College.  Our adventurer’s agreed and before long had entered Feng and began their stealthy reconnaissance.

Our adventurers wasted no time.  Goblin shenanigans, rooftop surveillance, and a wild carriage chase culminated in the capture and public shaming of the scheming LaNell.  Mara forced the truth from him with the help of some divine magic and the growing crowd got to hear about all his machinations from his own mouth.

Our adventurers may now have the chance to solidify new allies in their battle against the forces of evil and perhaps attend a wedding!