Our heroes spun the wheel again, this time aligning the strange 3 tentacled symbol, the letter G, and a shape that they hoped was the structure of the Mage College. 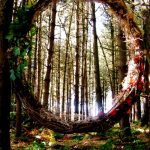 The portal activated and our heroes stepped through into an alpine glade to begin their reconnaissance.

Their arrival had been anticipated.  It wouldn’t be long before they came across a peddler and his dog.  Azrael obtained a small vial from the seemingly harmless old merchant and learned of the town in the valley below. Union.

As they made their way into Union, they found a boom town, hastily constructed and flush with foreign tongues and trade.  It wouldn’t take long to find their contact, the estranged Knight Garrick, undercover and waiting at the Spotted Pig. They found him and they found him much changed.

Once ensconced in the safety of his Tree Blind, Garrick explained the quest he had taken at Ao’s behest and its tragic ending.  The ordeal had left him broken mentally and physically. He recounted his tale through tears. He had received word that a small Marakeenian boy, important to Ao, was to be retrieved and brought to the Faithful in Arabar.  Finding and rescuing the boy from the cultists, who had captured him, had been easy. However, he could not have anticipated the power of the Dark Angel that set upon him afterward in the deserts of Marakeen. During the surprise attack the boy’s mother was killed, the child recaptured, and Garrick was left badly burned and bleeding out into the sand. Garrick would live, but saving the boy and killing Gahdreel was now the scourge that drove him onward.  He had sent messages to our adventurers for weeks, but all had been intercepted. He had almost hope.

Unfortunately for our party though, their arrival was definitely noticed and the seemingly innocuous vial they had purchased from the peddler became a beacon for their enemies. 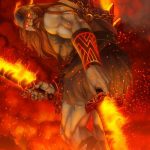 Our adventurers’ planning was interrupted by a powerful meteor strike that left Azrael badly wounded, Garrick thrown and unconscious, and the hideout destroyed. Minutes later, a force of soldiers and fire giants crashed through the woods to subdue them. Fortunately, the majority of the party had escaped the brunt of the arcane strike and were ready to unleash their full wrath upon their enemies.

Selena entangled one of the Fire Giants and Tarren engaged the other.  Kremzeek divided the human forces with a wall of light and then attacked with a devastating fireball.  Meanwhile, Andolin and Mara worked to take down the woman in robes levitating above the fray. The party’s abilities wove together to form a potent defense. The enemy’s defeat was complete as Tarrin called upon his ancestral horde.   As Selena bound the only surviving combatant, the woman’s eyes rolled back in her head and her features became animated with an uncanny presence. It was the Dark Angel Gahdreel. He rejoiced that the war had begun and invited Selena to join the winning side as his Queen. Selena’s response was a strong cross punch to the woman’s face, breaking the host’s jaw and silencing her permanently.

Our party gathered at the cliff edge to see that Gahdreel’s declaration was correct and the forces below were coalescing.  They barely had a moment to reflect before a thick cloud of gas enveloped  and incapacitated them all.

Our adventurers’ unconscious bodies were gathered by Nephlim and taken to be imprisoned in the depths of the Mage College.  However, the Nephlim had not realized that Garrick’s broken body was clinging on by a thread and that a goblin girl, who was invisible, terrified, and hidden well away from the fray, would save him. 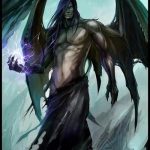 Meanwhile, each of our heroes would awake to their own personal temptation proffered by the Dark Lord.  When each refused they were sent to “rethink” their decision as some of their friends “had already done.”  The party refused to fall for the bait. Rather, they realized something deeply important. Gahdreel needed them and together, they presented a force that could thwart his ascension.  They only had one problem, they were trapped and naked. The magic dampening sands of Unis Mythris below their feet and a Dwarven Ironwood door blocking their escape, they grew desperate.  Fortunately, the barred windows to the tower weren’t made to keep out small goblin girls, and Blink and Garrick had seized the perfect opportunity to spring the prisoners. The Dwarven forces had arrived and aassault on the College was underway. 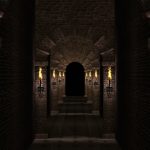 The time was ripe for a prison break.

Making their way through the levels of the College, our adventurers managed to regain most of their equipment with Kremzeek’s help.  Andolin succeeded in rescuing his father and a little Marakeenian boy. While on another level, Tarrin ripped out the unholy bloodmage baby that gestated in his dead sister-in-law’s belly and ended its life.  Spencer and her shadows made short work of the guards that remained, while Selena and Mara continued to explore and secure the party’s path to freedom. Through her familiar Veriliegh confirmed the arrival of several opposing forces and that the siege had begun. 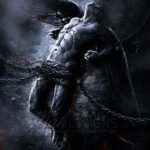 Azrael found Gahdreel’s throne room and the unearthly chains that had bound and incapacitated him.

With the smell of smoke growing, the battering of the towers by Dwarven Artillery, and the ever-looming threat of discovery, our party were thankful when their allies the storm giants blasted through the walls and offered them a means to escape.  Badly beaten and bruised the party must recover quickly and join the fight against the Gahdreel, his monsters, and his unwitting allies.